The Royal Society of Tasmania, Northern Branch, invites you to a public lecture by Professor Katie Flanagan, on Sunday March 28, 2021, at 1:15 pm. The lecture will commence at 1.30 pm following the branch Annual General Meeting.

The lecture will take place at the Meeting Room, QVMAG at Inveresk.

If you intend to attend in person: Due to COVID restrictions, registration will be required – phone 0417 330 118 or email apcachris@gmail.com

To view remotely via ZOOM: Register in advance by clicking here. After registering, you will receive a confirmation email containing information about joining the webinar.

Katie is a world-renowned clinician scientist, Head of Infectious Diseases at LGH and a Professor at UTAS, RMIT and Monash Universities. She is Honorary Secretary of the Australian Society for Infectious Diseases, chairs their Vaccination Special Interest Group, is a member of the Australian Technical Advisory Group on Immunisation, and chairs their COVID-19 Vaccine Utilisation and Prioritisation Subgroup.

Her talk will discuss the platform technologies being used to design COVID-19 vaccines, candidates in preclinical and clinical trials and phase 3 trial efficacy results. It will then discuss the progress globally with COVID-19 vaccine rollout and the Australian COVID-19 strategy and program in more detail. It will conclude with discussing next-generation vaccines including those against emerging SARS-CoV-2 variants.

The Royal Society of Tasmania invites you to a public lecture on Sunday 28 February 2021 at 1.30pm by Professor David Bowman.

He will deliver a lecture on his research into problem solving as a means of achieving sustainable co-existence with fire.

Register in advance for this webinar.

After registering, you will receive a confirmation email containing information about joining the webinar.

Click here to view the latest flyer for the event and print if necessary.

Due to circumstances beyond our control the advertised lecture by Dr Lavers has been postponed until 23rd May, and Professor David Bowman most generously agreed to bring forward his lecture previously planned for that date.

For those who missed the virtual lecture by lepidopterist Trevor Lambkin and QVMAG staff entitled “Butterfly Brilliance: The Lambkin-Knight Butterfly Collection” on October 25, 2020, view it now on our YouTube channel. Read more about the lecture here.

The Royal Society of Tasmania, Northern Branch, invites you to a Zoom webinar by Henry Reynolds, on Sunday November 22, 2020, at 1:30 pm.

Register in advance for this webinar. After registering, you will receive a confirmation email containing information about joining the webinar. 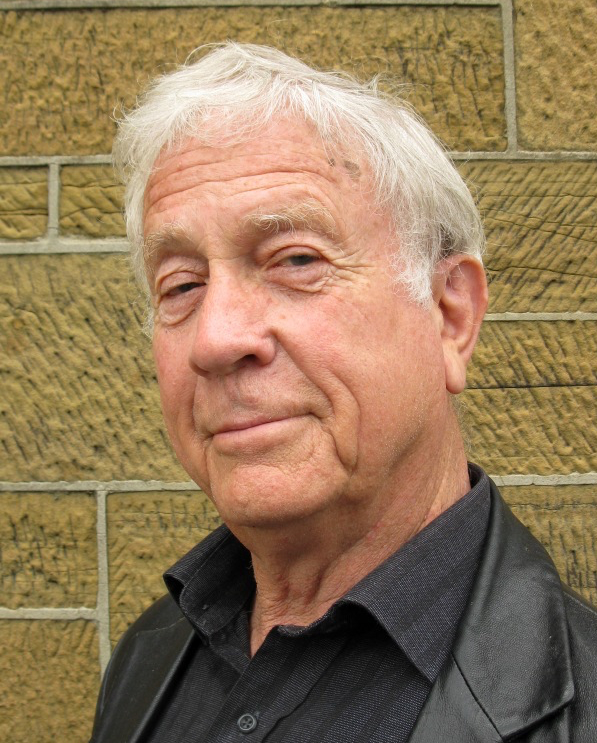 Andrew Inglis Clark was the one of the few republicans among the generation of colonial politicians who became the fathers of federation. His views are more interesting because they emerged from a long tradition of Tasmanian patriotism based on a powerful commitment to place, which was already apparent in the 1820’s and reinforced in succeeding generations.

Our speaker Henry Reynolds – Honorary Research Professor, Aboriginal Studies, Global Cultures & Languages at the University of Tasmania – grew up and was educated in Tasmania at Hobart High School and the University of Tasmania with a B.A hons and a M.A. With his wife Margaret he spent several years teaching in London, returning to Australia in 1965 to take up a lectureship in the new Townsville University College. He spent most of his career in North Queensland, and is best known for his many books, articles and documentaries about the relations between Aborigines and settlers.

Prof. Reynolds has published several articles about the Honourable Andrew Inglis Clark, including the entry on Clark in the Australian Dictionary of Biography.

Henry Reynolds has published 20 books and over 60 chapters in books and articles in journals.  Among his best known books are: The Other Side of the Frontier, The Law of the Land, This Whispering in Our Hearts, Fate of a Free People, Why Weren’t We Told, North of Capricorn, Forgotten War and Drawing the Global Colour Line co-authored  with Marilyn Lake. Many of his books have appeared on best-seller lists and total sales would be around 250,000 copies. Several of Henry’s books have won major literary prizes: the Prime Ministers Prize for non-fiction, the Queensland Premiers Prize (twice), the Human Rights Commission Prize for literature (twice), the Victorian Premier’s prize for non-fiction, the Banjo Prize of the Australian  Book Council, and the Ernest Scott  Prize(twice). His most recent book Forgotten War won the Victorian Premier’s Prize and was short-listed for the Queensland Premier’s prize and the Tasmanian Literary Prize.

Henry Reynolds received the Royal Society of Tasmania Clive Lord Memorial Medal, in 2016. Among numerous other awards and distinctions are:

The Royal Society of Tasmania invites you to a public lecture by Trevor Lambkin, David Maynard and Simon Fearn.

To participate in this webinar, you must register in advance; click here to do that. After registering, you will receive a confirmation email containing information about joining the webinar.

A collection of around 12000 butterflies compiled by Trevor Lambkin and Ian Knight over the last 50 years has most generously been donated to QVMAG. Including many hundreds of species, some extremely rare and some that are now extinct, it is an important part of Australia’s national research infrastructure.

Hear from one of the donors, lepidopterist Trevor Lambkin about building the collection, and from QVMAG staff David Maynard (Senior Curator of Natural Sciences) and Simon Fearn (Museum Collections Officer) on its research potential and housing such a large collection.

To participate in this webinar, you must register in advance; click here to do that. After registering, you will receive a confirmation email containing information about joining the webinar.

Professor Breadmore is pioneering the development of portable and transportable technology to provide chemical information when and where the sample is collected. Applications include the detection of home-made explosives at airports, the continuous monitoring of nutrients in our rivers, and more recently, whether we can use these to detect viruses.

After public education in northern Tasmania, our speaker graduated from University of Tasmania with BSc (Hons); PhD; DSc. He has made a continued and sustained contribution towards miniaturized analytical technology for clinical, forensic, environmental and food applications at UTAS. He was one of three finalists in the Eureka Outstanding Young Researcher Award (2011), has been listed in the Analytical Scientist’s power list of the top 100 analytical chemists in the world (2014, 2017, 2019), and is the Director of the Australian Centre for Research on Separation Science.

You are invited to a Zoom webinar.

Three University of Tasmania PhD Candidates will inform us about their research in a wide variety of topics – Diabesity, perfect bananas, and renewable energy from the sea.

Open this post to get instructions for participation. You will need to register in advance.

Click here to register in advance for this webinar. After registering, you will receive a confirmation email containing information about joining the webinar.

Royal Society members must register to attend this webinar.

After technical problems developed with registration for this webinar, it was necessary to change the meeting number. We apologise for the inconvenience, but if you registered before July 22, you will need to re-register using the link below. If you have told anyone else about the webinar we would appreciate it if you could pass on this information.

Click here to register [link removed].This will allow you to engage in the online Questions and Answers session following the lecture.

The lecture will be recorded.

Andrew’s talk will be image-rich and divided into four themes: (1) books and the film that inspired the creation of Launceston Revealed;
(2) a review of the book’s contents; (3) the images that didn’t make the cut and those that might be included in a possible future edition;
and (4) a call to arms: what viewers can do to help preserve Launceston’s spatial history.

Andrew Parsons has worked at the Australian Maritime College and the University of Tasmania libraries in both Launceston and Hobart,
and managed UTAS Library’s special and rare books’ collections in Hobart. As part of this role he served as Honorary Librarian to the
Royal Society of Tasmania. In 2013 he commenced as Library Coordinator with QVMAG, during which time the QVMAG Library’s
rare book collections have undergone significant development.

Andrew is the Honorary Librarian to the Northern Branch of the Royal Society of Tasmania.

Duyen Tran  –  “Diabesity”: a new opportunity for reducing the incidence of Type 2 Diabetes in the Obesity epidemic.

Duyen is a Pharmacy PhD candidate investigating the causes of insulin resistance in Type 2 Diabetes Mellitus (T2DM). Her project aims to determine whether the abnormal accumulation of toxic fats in skeletal muscles contributes to the elevation of glucose levels. Duyen’s findings will offer a novel prospective biomarker to predict the incidence of insulin resistance in the current “diabesity” (diabetes + obesity) epidemic.

Indika is attached to the Australian Research Council (ARC) Training Centre for Innovative Horticultural Products. His research is focused on understanding the compound forces that create fruit damage in the long road trip between the growing areas and markets, and an experimental approach to help industry deliver perfect bananas.

Christelle has a passion for renewable energy and the ocean. Her research at AMC focuses on how tidal turbines could influence sediment transport in highly energetic sites. She spent 17 days at sea to collect data northeast of Tasmania. The aim of her PhD is to assess the sediment dynamics at tidal energy sites in Australia and predict the environmental response to the extraction of energy.

The committee of the Royal Society of Tasmania Northern Chapter regrets to inform you that we need to defer the AGM and lecture which were to have been held on Sunday 22 March 2020.

We have made this decision reluctantly, but it has been made following the best medical advice. The health and well-being of our members and the community in general is of the utmost importance; we do not want to put anyone at risk of coronavirus Covid 19 infection.

We will resume our program as soon as it is safe to do so. 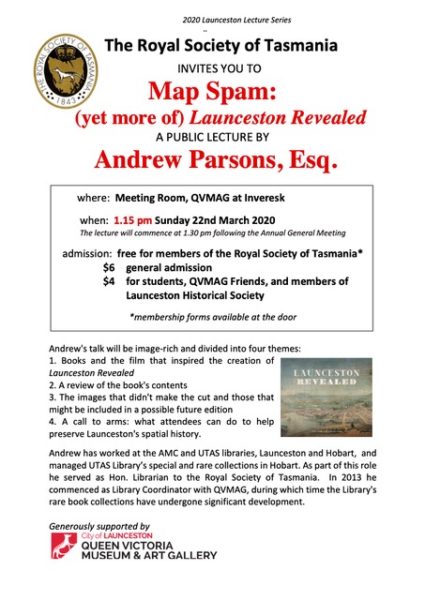