THE ROYAL SOCIETY OF TASMANIA

During the COVID-19 pandemic, the office bearers and Council members have worked very hard to keep the Society thriving. We are offering a vibrant program of online lectures via Zoom webinar, and recordings of these can be viewed on our newly established YouTube channel here. We have an exciting project in the pipeline for National Science Week: RST Council member Niamh Chapman is heading up a team to record a series of podcasts for our YouTube channel. This is a great way to share fascinating science with the community, and another first for our Society.

Restrictions on room occupancy mean we are not yet able to hold in-person lectures in our lecture room, but the RST office is open on Wednesday mornings for phone or in-person enquiries and sales of merchandise.

A highlight of the RST year is the launch of the annual calendar, and the 2021 edition is particularly beautiful. We extend grateful thanks to Dr Margaret Davies OAM for her work in compiling this. The images of artworks by Simpkinson de Wesselow come from paintings held in the Royal Society of Tasmania collection on loan to the Tasmanian Museum and Art Gallery. The calendar features scenes of northern Tasmania in honour of the centenary of the Northern Branch of our Society, which will be celebrated next year.

We are continuing to do our utmost to fulfil the Society’s mission of ‘advancing knowledge.’ Papers are now being sought for our Papers and Proceedings – please consider contributing a paper, and encouraging your friends and colleagues to do likewise. Nominations are now open for the Peter Smith Medal – do you know an outstanding early career researcher you could nominate for this award? Bursaries to secondary students continue to be offered, and the Doctoral Awards will be advertised a little later in the year.

I extend very warm thanks to all the members who have supported our Society by renewing their membership during the pandemic, and we have been extremely pleased to welcome new members each month.

Please email me if you have any queries: royal.society@tmag.tas.gov.au

On Wednesday, 4 December 2019, the University of Tasmania became the ﬁrst learned institution in Tasmania to offer a formal apology to Tasmanian Aboriginal people.​ ​

Vice Chancellor, Professor Rufus Black, marked the day as one on which “… we reﬂect on the parts of our past we are not proud of …a moment for humility, truth-telling, pain and accountability.” Broadly welcomed by Aboriginal people and positively reﬂected on across Tasmanian media, the University’s apology was offered in response to over a century of disrespectful treatment of Aboriginal people by the academy. “For too long the histories we taught hid the true story of war and genocidal behaviour. For too long the wisdom of Aboriginal people was not thought worthy of our academy,” Prof Black said.​

During 2019, the Royal Society of Tasmania has made substantial progress toward the development of its own Apology. Like the University of Tasmania, the Society was also involved in research and treatment of Aboriginal ancestral remains that is now recognised as disrespectful and has contributed to ongoing hurt being felt by today’s Aboriginal people. The development of the Society’s Apology has been a painstaking one, involving independent commissioned research and close examination of Society​ records to ensure that an accurate and objective assessment could be made of a range of activities that impacted on Aboriginal people. The Society’s approach has been to thoroughly account for the decisions and actions that it should take responsibility for and to better understand the context of those actions.​

An Aboriginal Engagement Committee jointly chaired by Prof Matt King and Prof Greg Lehman worked under close direction of the RST Council to produce two discussion papers and reports to Members during 2019, outlining key issues considered by the Apology process, and identifying a number of recommended actions to accompany a formal Statement of Apology.​

Following a special meeting of the Council on 19 December 2019, a draft Apology to Tasmanian Aboriginal people has now been produced. This was recently presented for conﬁdential consideration by the Aboriginal Advisory Council of the Tasmanian Museum and Art Gallery, which is also developing its own apology. It was agreed that the RST and TMAG would work cooperatively to plan an event at which both institutions would present their respective statements. Similar consultation will also be held with the Queen Victoria Museum and Art Gallery’s Aboriginal Reference Group to ensure that sensitive matters involved in the Apology are dealt with appropriately and respectfully. Further information will be provided to Members of the Society when the Apology is ﬁnalised and a date for its announcement is set.

Reproduced from the April, 2020 RST Newsletter.

Call for nominations for the 2020 Peter Smith Medal

Nominations are now open for the Royal Society of Tasmania Peter Smith Medal. This medal is awarded biennially to an outstanding early career researcher in any field. The recipient receives a medal and will be invited to deliver “The Peter Smith Lecture” to the Society.

For the purpose of the medal, “early career” means within the first seven years since the award of a PhD, at the time of the nomination deadline. Extensions to the seven years post-PhD eligibility requirement will be offered to applicants whose career has been interrupted to accommodate carer responsibilities, illness or other circumstances.

Further conditions of the award are:

On the second page, provide a concise description of the nominee’s achievements relevant to the Peter Smith Medal in language that is widely understood outside the nominee’s field of research. The nominee’s research or other scholarly contributions to science, history or other field of learning, industry or society should be clearly stated.

Provide the nominee’s curriculum vitae in full. Include the nominee’s education history, the date/s of receipt of degrees and a list of published works. The most significant publications should be highlighted (e.g. with an asterisk). For co-authored papers, provide a percentage estimate of the nominee’s contribution. The Honours, Medals and Awards Committee has limited ability to seek additional information and therefore depends entirely on the nomination submission.

All matters pertaining to the Society awards are confidential until the public announcement of the awards at the Society’s Annual General Meeting each year. Confidentiality must also be observed by both the nominator and nominee.

Please send nominations as a single Word or pdf file by email to the Secretary royal.society@tmag.tas.gov.au before COB, August 31, 2020. Please enter “Honours Committee” in the subject line of the email message.

Want to learn something new while stuck at home?

Tune in to “That’s What I Call Science”, a weekly radio show and podcast featuring interesting and relevant science happening in Tasmania and across Australia. 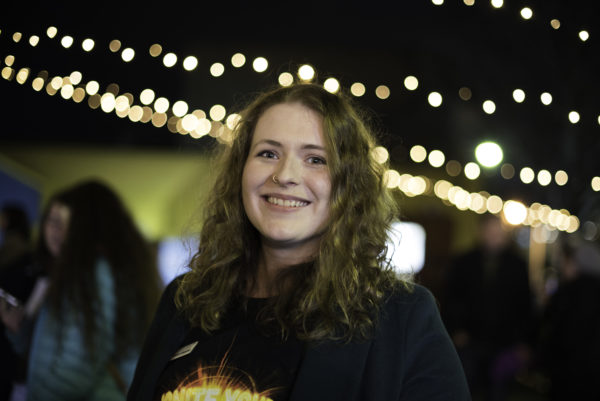 Niamh Chapman, one of our new Royal Society of Tasmania Council members, is the founding director and regular host of the show.

Led by an all-woman team of scientists from the University of Tasmania, the show chooses a topic each week and interviews a knowledgeable local guest in a conversational style interview. 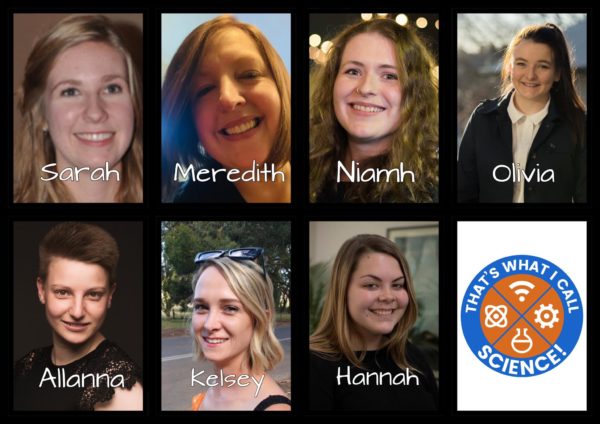 The podcast can be found on major streaming services or at http://bit.ly/ThatsScienceTAS 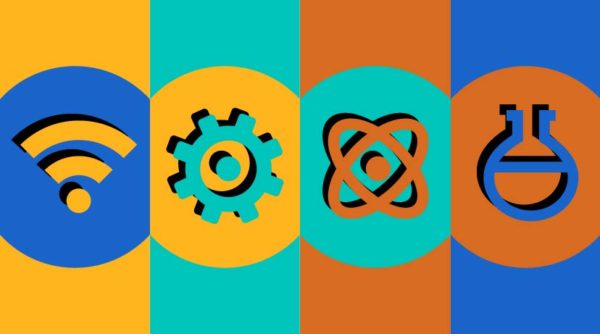 The Royal Society of Tasmania Entomology Go challenge – what will you spot?

With nearly ten quintillion insects on earth you can’t catch em all!! But you may have a photo of an unknown insect on your phone, a dead one on your windowsill or a live one in your backyard?

Royal Society Entomologist, Shasta Henry, wants you to GO and discover some of the unique insects in your world; don’t worry She will help. Submit photos (or drawings) of your catches for the opportunity to receive Entomology Go ID cards and learn some wonderful facts about your insects.

Submissions should include the: LOCATION, DATE, SIZE (try including a coin in your photo)

WARNING: Some insects bite and some sting! Search respectfully – look but do not touch.

Click on this link for ideas from Shasta speaking in an interview with the ABC about catching and identifying bugs at home. 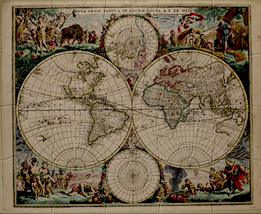 Enjoy some jigsaws created by Heather Excell from the treasures of the UTAS Special and Rare Collections Library, including a map jigsaw from the Royal Society of Tasmania Map Collection:.

These images represent a very small sample of the cultural and historical records held in the collection.

Explore the collections further, through the ONLINE ARCHIVE and WEBSITE

The Royal Society of Tasmania is offering bursaries for Tasmanian secondary/senior secondary students who have been selected through a competitive process to represent Australia at an international event. The amount of each bursary may be up to $1000.

What is the Royal Society of Tasmania?

The Society has been in active existence since 1843 and we have continued to achieve our aim of ‘advancing knowledge’ in a wide variety of ways. The bursaries are one way in which we support the youth of Tasmania.

In 2018 bursaries were offered in the fields of science, mathematics and engineering. In 2019 the bursary program was broadened to also support students selected through a competitive process for international events in the arts, humanities and social sciences.

What is the closing date?

There is no closing date for applications, as applications are considered on a rolling basis throughout the year.

Students need to send a written application including:

· a brief descriptor of the international summer school or event they have been selected to attend, including dates and costs

· a concise statement, written by the student, about their goals and aspirations and a short CV (max 2 pages)

· the endorsement of a senior staff member of their school.

Note: As the student/staff member may be contacted for interview/further information please provide contact phone numbers.

Penguins and sea birds of Antarctica,

the illustrations of Edward Adrian Wilson (1872–1912),
artist on the Robert Falcon Scott expeditions to the south

The Royal Society of Tasmania 2020 Calendar is now available for purchase. A beautiful gift for any occasion, the calendar can be purchased at our on-line shop, by postal order or directly from the Royal Society Rooms

If you purchase directly from the Royal Society Rooms the price is $18.00 – open Wednesday mornings, at 19 Davey St (opp. Constitution Dock).

Or order by post for $24.00 per copy (including handling and postage within Australia). Download the Order Form here: 2020 Calendar Order Form0 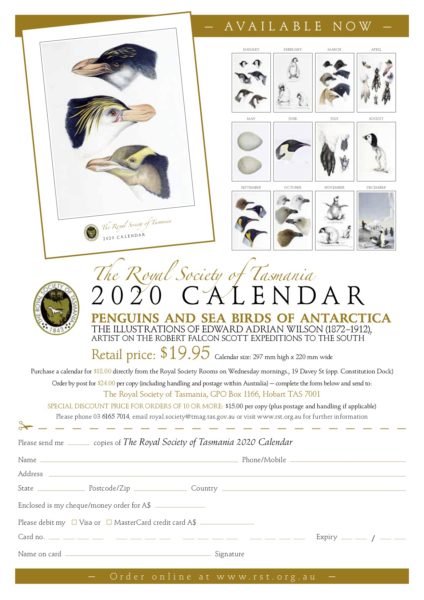 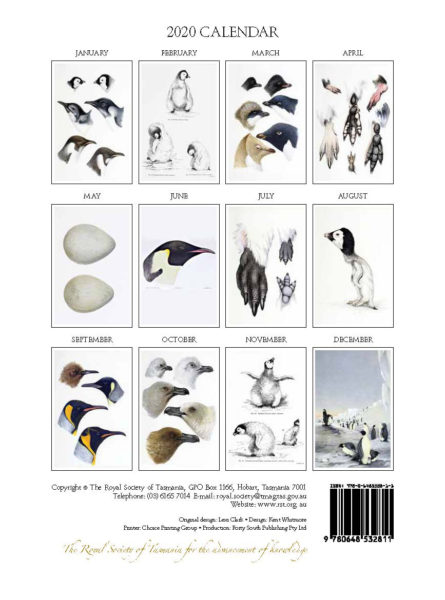