PLEASE NOTE: TICKETING FOR THE MEDAL PRESENTATION AND LECTURE HAS NOW CLOSED.

Members and friends are invited to attend The Royal Society of Tasmania Medal Presentation and Lecture, to be hosted at Government House by Her Excellency Professor the Honourable Kate Warner, AC, Governor of Tasmania. and Mr Warner at 6.00pm on Thursday 30 August 2018.

The recipient of the medal and lecturer is Emeritus Distinguished Professor Ross Large.

The Royal Society of Tasmania Medal was established in 1927 and is the most prestigious award conferred by the Society.

The Rhythms of Earth and Life Through Time

Earth has a pulse called plate tectonics and this pulse has controlled the formation of great mountain ranges, the chemistry of the oceans and the evolution of life over the last four billion years. The formation and break up of supercontinents, the supercontinent cycle, involves continental plates crashing together to build major mountain ranges. This process, in geological terms, was slow to get underway, occurring roughly every 400 to 600 million years in the early stages of Earth history.

However, about 600 million years ago, the plate tectonic and mountain building process sped up to a frequency of 60 to 120 million years. This change in the rhythms of Earth processes was fundamental to the evolution of life, starting with the Cambrian explosion at 550–520 million years ago, followed by cycles of rapid bio-diversification, then mass extinction.

Five cycles driven by plate tectonics and mountain building took place over the last 600 million years, each commencing with diversification of life and ending in a major mass extinction event. These constitute the rhythms of Earth and life. 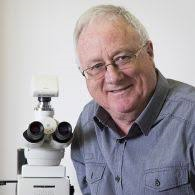 For ten years Ross worked in the mineral exploration industry. In 1984, he joined the University of Tasmania and, five years later, established the Centre for Ore Deposit and Exploration Science (CODES). Under his leadership, CODES grew to become recognised as one of the top industry collaborative ore deposit research centres in the world.

He has won many awards during his career – the most recent as lead scientist for a UTAS team that won the 2016 Eureka Prize for interdisciplinary research. Ross is the President of The Royal Society of Tasmania and the Chair of the Tasmanian Division of The Academy of Technology and Engineering.

You can hear Ross talking about his research on ABC Radio Hobart Breakfast with Ryk Goddard.