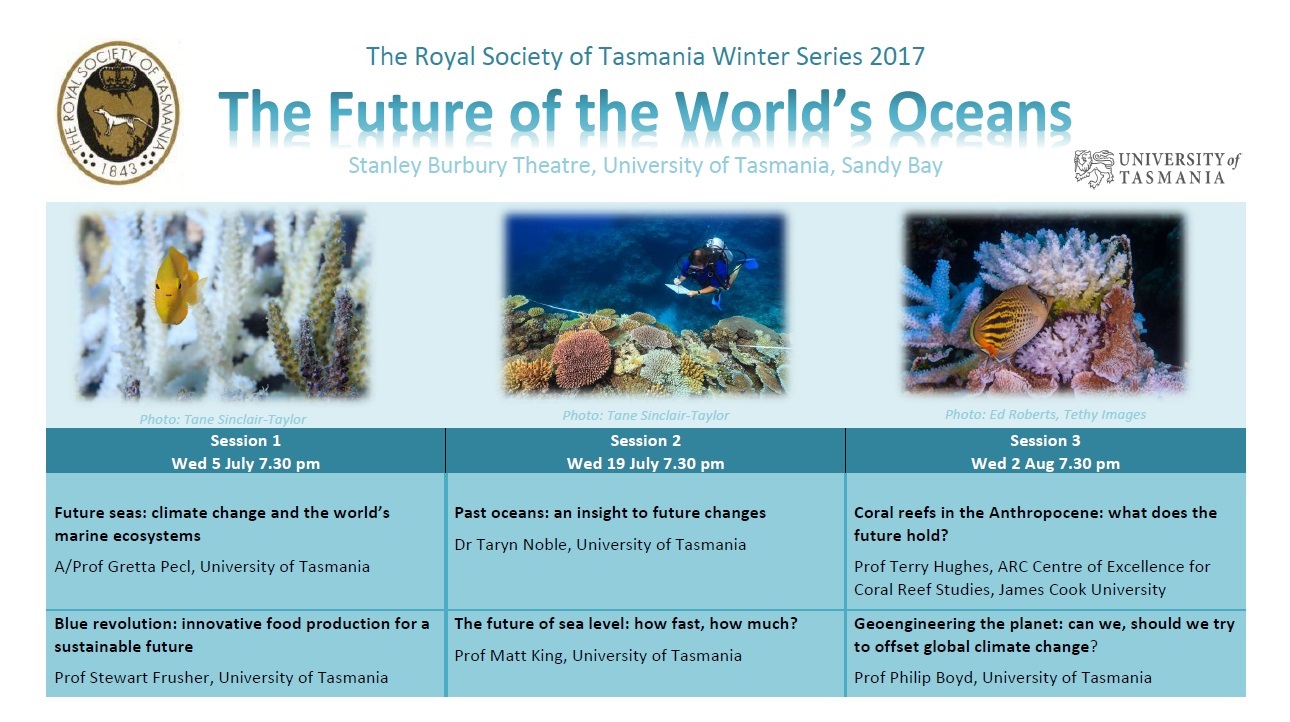 Coral reefs will still be alive and reasonably well in 100 years’ time, but only if we try a lot harder to secure their future. Over the coming centuries reefs will run the gauntlet of climate change, when rising temperatures will transform them into new configurations unlike anything previously experienced by humankind. Returning coral reefs to past configurations is no longer an option. Instead, the global challenge is to steer reefs into the future in a way that maintains them as functioning and sustainable ecosystems. This is a confronting message, but ultimately an optimistic one. The most important and difficult challenge is to achieve the COP21 Paris Agreement targets of 1.5-2C of global average warming, because business-as-usual emissions of greenhouse gasses will certainly destroy reefs as we know them.

Terry Hughes is the Director of the Australian Research Council’s Centre of Excellence for Coral Reef Studies, headquartered at James Cook University in Townsville.  His research interests encompass the biology of coral reefs, their evolution and governance. A recurrent theme in his studies is the application of new scientific knowledge towards improving management of marine environments. Terry conducted widespread aerial surveys of the Great Barrier Reef in 2016 and 2017 to measure the extent and severity of back-to-back coral bleaching due to global warming.

Geoengineering is defined as a deliberate intervention in the Earth system of a nature and scale intended to counteract human-induced climate change and its impacts.  Two distinct forms of climate intervention have been proposed: large scale removal and storage of the greenhouse gas carbon dioxide, or the reflection of a proportion of incoming solar radiation back into space.  It has become clear from the recent COP21 Climate Agreement in Paris in late 2015, that in order to limit global temperature rise to no more than 2C, some form of ‘negative emissions’ will probably be required.  In the absence of enough climate mitigation, could geoengineering help us to meet the COP21 targets to limit warming?  In this presentation Philip Boyd will discuss both the benefits and challenges of intervening in Earth’s climate.

Professor Philip Boyd is an ARC Laureate Fellow at the Institute for Marine and Antarctic Studies in Hobart. He currently co-chairs the UN GESAMP Working Group 41 on marine geoengineering. Boyd has worked in the field of ocean biogeochemistry for over two decades, examining the role of iron enrichment in setting ocean productivity. He successfully co-ordinated two of the largest scientific ocean manipulation studies to date (large enough to be seen from space) which have provided indirect insights into marine geoengineering.  Professor Boyd has also written widely on the scientific, socio-economic and geo-political aspects of geoengineering, including contributing to the UNESCO Guide to Policymakers on ocean iron fertilisation.

Our oceans are important for our culture, and are major sources of food production, recreation and employment with relevance at local, regional and international scales. However, our oceans are changing rapidly and understanding the implications of climate change and how we can best adapt to these is a major global challenge facing society. One of the most pervasive effects of climate change is a universal major redistribution of life on Earth – as the climate warms, plants and animals are shifting polewards. These changes are largest in our oceans, compared with on land, and are greatest where the ocean is warming the fastest. Around the Australian coast are several ‘marine hotspots’, areas of the ocean that are in the top 10% for rates of warming and are experiencing extensive changes in the structure and function of marine ecosystems. Gretta’s talk will highlight some of the climate-driven changes occurring in our oceans, around Tasmania, other parts of Australia, and in regions like Madagascar where there are serious implications for food security. She will finish with a citizen science example of how Australians can become involved in marine research and help us better understand the implications of climate change in our local seas.

Gretta Pecl is an Associate Professor of marine ecology with broad interdisciplinary research interests and a passion for science engagement and communication with the public. Much of her current research centres around understanding climate change impacts in marine systems, and how our marine industries and communities may best adapt to these changes. She developed and leads the very successful national citizen science project Redmap Australia, the Range Extension Database and mapping project, which invites fishers and divers around our coastline to help monitor changes in our seas. Gretta is also currently working with international colleagues on a Global Network of Marine Hotspots to facilitate learning and communication among the world’s most rapidly warming ocean regions. Associate Professor Pecl is a Fulbright Fellow, an ARC Future Fellow, a University of Tasmania ‘Rising Star’ and the Editor-in-Chief of the international journal Reviews in Fish Biology and Fisheries.

With over 70% of the Earth’s surface covered by the oceans it is not surprising that attention is turning to the oceans to meet some of the challenges associated with an increasing population. The global blue (or ocean) economy is predicted to double to US$3 trillion by 2030 and is poised to undergo a profound transition. Part of this transition will be the development of offshore infrastructures that underpin multiple industries including food and energy. As we venture into this new arena, we have the opportunity to re-think how we currently ‘farm’ our oceans. The “green revolution” may provide lessons that can usefully be applied to ensure that the development of offshore marine production systems is sustainable, environmentally appropriate and socially acceptable. This presentation will also highlight where there could be opportunities for Tasmania.

Professor Stewart Frusher undertook his tertiary education at James Cook University in North Queensland after which he joined Australian Volunteers Abroad and worked on commercial and artisanal fisheries in Papua New Guinea. He subsequently worked at the Australian Institute of Marine Science in coastal ecosystems and aquaculture before coming to Hobart in 1992. Over the last couple of decades, he has led the Fisheries Program, Coasts and Estuaries Program and the Climate Change Impacts and Adaptation theme at the University of Tasmania. He is currently Director of the Centre for Marine Socioecology, which brings together researchers from the University of Tasmania, CSIRO and the Australian Antarctic Division across broad disciplines to focus on multiple use management of the marine domain.

Oceans play an important role in global climate. So far 40% of the anthropogenic carbon and 90% of the heat released into the atmosphere since industrialisation has been absorbed by the Southern Ocean. As well as being an important region for the exchange of carbon dioxide and heat, the Southern Ocean acts as thermal barrier isolating the Antarctic ice sheet from the warmer tropics. Oceanographic measurements over the past few decades document significant changes in the characteristics of Antarctic Bottom Water, a key component of the global circulation system, which is becoming warmer and fresher. Understanding how ocean circulation has changed along the Antarctic margin is vital for understanding how the Antarctic ice sheet will respond to warming of the surrounding ocean. Marine archives, such as marine sediment cores, can provide a wealth of information about how the global ocean has changed from hundreds to thousands and millions of years ago. Past climate records can also provide analogues to the current climate warming. Dr Noble will discuss how we can reconstruct the role of oceans in regulating our planet’s past climate, and what lessons we are likely to learn for the future.

Dr Taryn Noble is a marine geochemist at the Institute of Marine and Antarctic Studies (IMAS), University of Tasmania. Taryn received her PhD from the University of Cambridge in 2012 on paleoceanography of the Southern Ocean. In 2016 she was awarded a SIEF John Stocker Postdoctoral Fellowship. Taryn’s research interests involve using marine sediment cores and seawater to study past ocean circulation and the role oceans play in climate. Her current research is focused on understanding the role of ocean circulation in melting the Antarctic ice shelves during the last deglaciation.

Antarctica, Greenland and the small glaciers around the globe are together losing hundreds of billions of tonnes of ice into the ocean each year. As the planet has warmed the oceans have expanded, and these factors have driven sea-level rise. But what does the future hold? How fast will sea level rise in the coming decades? The accurate answer to that question depends both on human influences on the climate and the uncertain role of the awakening giant of the vast Antarctic Ice Sheet. Future changes in Antarctica will not only have an important effect on the global average rate of sea-level rise but will also determine which regions of the globe will suffer the most drastic effects.

Professor Matt King completed a Bachelor of Surveying at the University of Tasmania before undertaking a PhD using surveying data to quantify changes in the motion of a large floating Antarctic ice shelf. He then moved to the UK where he researched applications of GPS positioning. Matt is Professor of Polar Geodesy and an ARC Future Fellow at the University of Tasmania where he works on observing and modelling the Antarctic Ice Sheet, sea-level change and the changing shape of Earth. Matt has travelled to both Antarctica and Greenland, and in 2015 the Royal Society (London) awarded him the Kavli Medal and Lecture for his work that contributed to the first reconciled estimate of Antarctica and Greenland’s contribution to sea-level change. Matt is President of the Royal Society of Tasmania.