The Royal Society of Tasmania is very pleased to invite members and friends to a special lecture co-hosted with the Academy of Technology and Engineering. Dr Stephen Rintoul, Interim Director of the CSIRO Climate Science Centre, will present the lecture titled ‘Hunting for Climate Clues in the Southern Ocean’. The lecture will be held on 9 November 2016 in the Stanley Burbury Theatre, University of Tasmania, Churchill Avenue, Hobart.

Welcome drinks will be served at 6 pm, followed by the lecture at 6.30 pm.

Global warming is ocean warming: more than 90% of the extra heat stored by the planet in the last fifty years is found in the ocean.  The Southern Ocean is particularly important to the transfer of heat (and carbon dioxide) from the atmosphere into the ocean. The lecture will discuss the role of the ocean in the climate system, with a particular focus on the Southern Ocean and the potential vulnerability of the Antarctic ice sheet to warming of the surrounding ocean. 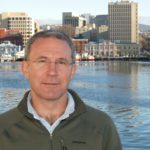 Dr Stephen Rintoul AAM FAA is a physical oceanographer and climate scientist.  He is the Interim Director of the newly established CSIRO Climate Science Centre. His research has contributed to a deeper appreciation of the influence of the Southern Ocean on regional and global climate, biogeochemical cycles and biological productivity. Born in the USA, he did his graduate studies at the MIT-Woods Hole Oceanographic Institution Joint Program and postdoctoral work at Princeton before moving to Australia to take up a position at the CSIRO. He has led 15 expeditions to the Southern, Indian and Pacific Oceans. He was a Coordinating Lead Author of the Oceans chapter in the 5th Assessment Report of the Intergovernmental Panel on Climate Change (IPCC). His scientific achievements have been recognised by many national and international awards including the Royal Society of Tasmania MR Banks Medal (2003).