Dinosaur “bling” at Lightning Ridge and dinosaur tracks in “Australia’s Jurassic Park” are just some of the fascinating subjects covered by internationally renowned speakers at our upcoming Dinosaur Symposium (23-24 March) hosted by the University of Tasmania.

Here is a sneak preview of the program –

Winton – home of the Big Dinosaur

Dr Stephen Poropat, from Swinburne University, will talk about the dinosaurs of the Winton Formation in Queensland. One recent discovery in Winton proved to be the most complete sauropod ever found in Australia.

Sauropods include among their ranks the largest terrestrial animals that ever lived: some were more than 30 metres long, others more than 13 metres tall, and still others tipped the scales at more than 50 tonnes. 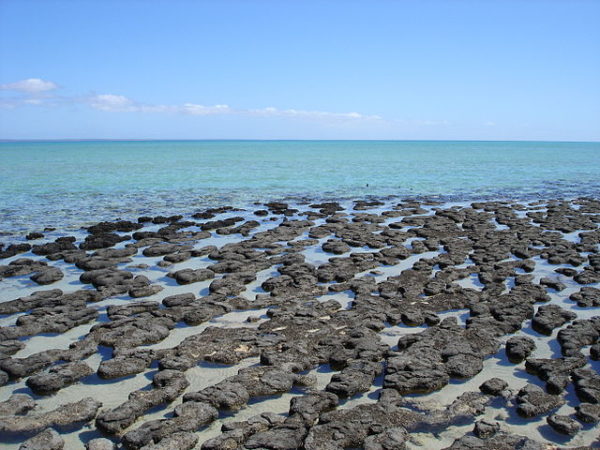 Dr Indrani Mukherjee, from Earth Sciences at the University of Tasmania, will talk about life on very early Earth, the Precambrian Era. This period, spanning from 4500 million years ago to 540 million years ago, is known to record some of the most significant transitions and breakthroughs in the evolution of life. What shaped the course of evolution has always fascinated us. Whether it was the concentration of oxygen in the atmosphere and ocean, nutrients in the ocean, or supercontinent cycles, or a combination of all these factors, the question is being thoroughly investigated.

This talk focuses on some of the key biological events in the Precambrian, particularly between (3500 to 800 million years ago) and provides a geological explanation for the cause of these events. The talk ties the geochemical conditions of the ocean and the atmosphere with evolution and diversification of complex microscopic life that facilitated macroscopic life on Earth, including dinosaurs! 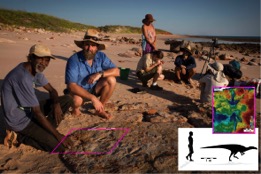 Dr Steve Salisbury, from The Queensland University Dinosaur Laboratory, will talk about the discovery of spectacular dinosaur tracks in the Kimberley region of north Western Australia. An unprecedented 21 different types of dinosaur tracks have been identified on a 25-kilometre stretch of the Dampier Peninsula coastline dubbed ‘Australia’s Jurassic Park’.

According to Dr Salisbury, “The dinosaur track fauna of the Broome Sandstone is extremely significant, forming the primary record of non-avian dinosaurs in the western half the continent and providing our only glimpse of Australia’s dinosaur fauna during the first half of the Early Cretaceous Period”. 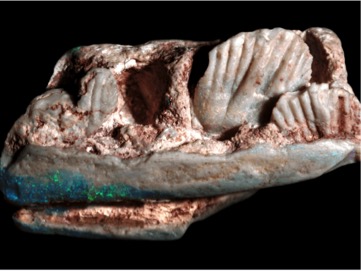 The Right Lower Jaw of Weewarrasaurus Showcases the Rainbow Hues of Opal in the Fossil. Photograph by Robert A. Smith

Dr Phill Bell, from University of New England, will talk about the amazing opalized dinosaur bones unearthed at Lightning Ridge in NSW, including the recent discovery of the jaw bone of a small ornithopod. The dinosaur has been named Weewarrasaurus pobeni – a name that recognises the fossil’s unearthing in the Wee Warra opal field, and honours Mike Poben, an Adelaide-based opal buyer who donated the specimen for research.

Like all fossils from the Lightning Ridge opal mines, the lower jaw—the only piece of the animal recovered—is preserved in opal. Precious opal gives off a rainbow of colours, in this case shimmering green and blue. Lightning Ridge is the only place in the world where dinosaur bones are commonly replaced by precious opal. 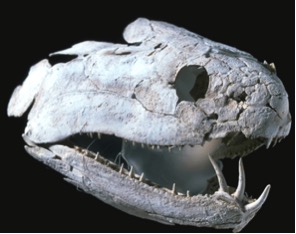 The exquisitely preserved 3D skull of Onychodus, a bony fish predator on the ancient Devonian reef of the Kimberley (Gogo site). Such fossils help us understand the evolution of vertebrates before the dinosaurs.

Professor John Long, from Flinders University, will give us the history of evolution of life on Earth, from single celled bacteria to fishes, then dinosaurs, birds and finally humans. He is an internationally acclaimed exceptional speaker and has led fossil digs all over the Earth. He is currently in Antarctica on a dig, but will be back in time for our symposium.