The common perception of the Antarctica continent is that is frozen and unmovable. Over the last two decades, remote fieldwork and technological advances have yielded geodetic datasets that show that much of Antarctica may be frozen but it far from unmovable. Rather, the ice sheet and the bedrock it sits upon are highly dynamic. GPS measurements of ice sheet motion show changes on timescales of minutes to hours to decades, while even more precise measurements of bedrock motion shows rapid and prolonged response to Earthquakes and glacier thinning. This presentation will highlight how measuring Antarctica’s response to a series of great natural experiments has given new insights into fundamental processes that are active within the ice sheet and solid Earth. They allow us to be better prepared to predict the future of the great ice sheet as it becomes increasingly unfrozen. 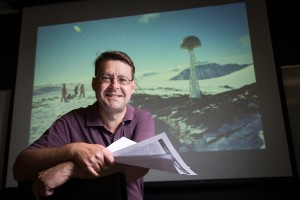 Matt started focusing on Antarctica during his PhD at the University of Tasmania, where he quantified multi-decadal changes in the motion of a large floating Antarctic ice shelf using surveying data. He then moved to the UK where he researched the application of GPS positioning to understanding subsidence of offshore platforms, glacial dynamics, Earth deformation and Antarctica’s contribution to recent sea-level change. He has travelled to both Antarctica and Greenland and published over 80 peer-reviewed journal articles, including several in the leading journals Science and Nature. In late 2012 he returned to the University of Tasmania as Australian Research Council Future Fellow and Professor of Polar Geodesy. In 2015 the Royal Society (London) awarded him the Kavli Medal and Lecture.