Trevor McDougall is the recipient of  The Royal Society of Tasmania Medal for 2013.  Trevor will be presented with his medal and will then give his presentation.

Brief bio = After a 28-year career at CSIRO Marine in Hobart, Trevor McDougall is now the Scientia Professor of Ocean Physics in the Applied Mathematics department at the University of New South Wales in Sydney where he conducts research on the physical and thermodynamical aspects of mixing processes in the ocean.
Précis = The central features of the ocean-ice-atmosphere system will be reviewed, including how we know that the warming of planet earth over the past century is caused by our pollution of the atmosphere with Greenhouse gases. In this coupled climate system the ocean plays two main roles, (i) it is a vast store of heat, acting as a large “thermal flywheel”, and (ii) it transports heat from the equatorial region to the polar regions. The ocean’s ability to perform these roles is sensitive to the amount of mixing in the ocean, and this provides the motivation for studying mixing processes and for properly following the transport of heat throughout the ocean 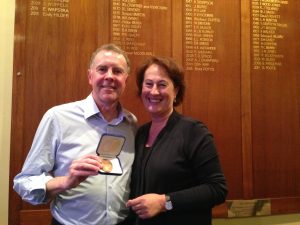