The Rhythms of Earth and Life through Time

A Public Lecture by

Admission is free for members of the Royal Society of Tasmania

$6 for general admission, and

$4 for students, QVMAG Friends, and members of Launceston Historical Society.

This talk by challenges the Darwinian concept that evolution is a random process. Professor Large outlines recent research on the trace element composition of sedimentary pyrite that demonstrates that the chemistry of the oceans and atmosphere has varied significantly through geological time in a rhythmic fashion, which has greatly influenced the course of evolution on Earth. The rhythms, which are ultimately driven by super continent cycles and mountain building events, have sped up through time, and not only control evolutionary events, but also the variation of atmosphere oxygen and mass extinction events. 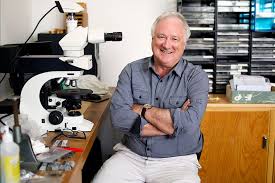 Ross Large is an Emeritus Distinguished Professor of Geology at the University of Tasmania. He gained his BSc (Hons) from the University of Tasmania in 1969, PhD from University of New England in 1973, and an Honorary Doctor of Engineering from the University of Lulea, Sweden. Ross has published over 130 scientific papers and is internationally recognised for his research on the genesis of ore deposits and relationships to Earth evolution. He has won many awards during his career the most recent being the 2016 Eureka prize for interdisciplinary research, and the 2018 Medal of the Royal Society of Tasmania. He was awarded an Order of Australia in 2019. Ross is the current President of the Royal Society of Tasmania and the immediate past chair of the Tasmanian Division of The Academy of Technology and Engineering.

This event is generously supported by