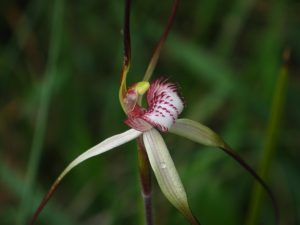 Tasmania has a rich orchid flora reliant on important above and below ground ecological interactions for growth and survival. Due to the high specificity of these interactions and the changes imposed on Tasmania’s landscape through anthropogenic activities, many of Tasmania’s orchids are endangered and threatened with extinction. 214 native orchids have been recorded in Tasmania and of these, 68 are listed as threatened on Tasmania’s Threatened Species Protection Act and 32 are listed on the Commonwealth Environment Protection and Biodiversity Act. At the Royal Tasmanian Botanic Gardens, we are undertaking research to determine why these species are threatened and how best to conserve them using key features of their complicated biology and ecology.

Dr Nigel Swarts is a Research Fellow in the Tasmanian Institute of Agriculture at the University of Tasmania and a research consultant hosted by the Royal Tasmanian Botanical Gardens. Nigel has a background in Conservation Biology with research focusing on rare and endangered orchids from across Australia. He has a strong track record in the field of orchid conservation with two highly cited review articles. He completed his PhD with distinction on the conservation of critically endangered orchids with the University of Western Australia in 2008. Nigel’s research has led to a better understanding of the role of mycorrhizal specialization in the ecology and rarity of the Orchidaceae.

Admission: $6 General Public, $4 Friends of the Museum and Students.

Free for members of The Royal Society of Tasmania.

To assist us with the organisation of this event please RSVP by Thursday 21st April 2016 to either bookings@qvmag.tas.gov.au or telephone 6323 3798