Five near extinguishments of life on Earth have been related to changes in Earth’s atmosphere and oceans. Extra-terrestrial meteorites are often blamed, but Earth’s own forces may be suspect. Heat within the Earth builds volcanoes. Even small volcanic eruptions have local, regional and global climate effects. Giant lava fields coincide with the three most recent mass extinction events. Scaling up impacts from small eruptions to such voluminous eruptions indicates that volcanism is a major contributor to climatic disruption, with dire consequences for life.
Dr Karin Orth lectures in Earth Sciences at the University of Tasmania. After a primary degree at Monash University and working for the Victorian Geological Survey, she gained her PhD in Tasmania. She has worked on ancient volcanic rocks in various regions across Australia, most recently on a very large field of ancient volcanic rocks that stretch across the Kimberley of northern Western Australia. 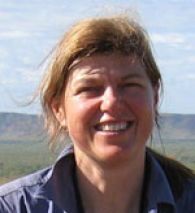