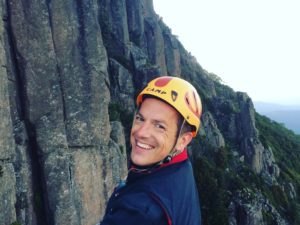 Dr Klocker will talk about the 2016, 2017, and 2018 caving and cave diving expeditions he led to Sistema Huautla, one of the world’s deepest cave systems located in the southern Mexican state of Oaxaca.  The goal of the expeditions is to connect Sistema Huautla with its outlet in the remote Santo Domingo Canyon about 10 kilometers from its entrance.  The successful connection of Sistema Huautla with its outlet would result in the world’s deepest and most spectacular cave traverse.

Dr Klocker will focus in particular on the March 2018 expedition which promises to be one of the most ambitious and challenging cave diving projects ever attempted as the divers attempt to surpass the previous limit of exploration, some five kilometers underground, reached in 1984 when logistical challenges halted progress.

Dr Klocker, originally from Austria, completed a diploma in marine environmental science in Germany, and moved to Hobart to work as honorary research fellow at the Antarctic Climate and Ecosystems CRC.  He undertook a PhD as part of the UTAS-CSIRO joint PhD program in Quantitative Marine Science, followed by a postdoctoral position at the Massachusetts Institute of Technology where he worked on ocean turbulence in the Southern Ocean.  He returned to Australia as a Research Fellow at the ARC Centre of Excellence in Climate System Science and the Australian National University.  Dr Klocker was then awarded an ARC DECRA Fellowship at the Institute for Marine and Antarctic Studies continuing his specialist work on ocean turbulence.

Dr Klocker got hooked by caving in 2008 while doing his PhD, and soon after combined his caving and diving addiction to become a cave diver in 2011.  In Australia his main focus has been on cave exploration in the Junee-Florentine in Tasmania, an area known for Australia’s deepest cave systems, remote sumps and huge exploration potential.  In the last couple years he also turned his attention towards major cave systems in Mexico, in particular Sistema Huautla, where he enjoys the challenge of combining deep ‘dry’ caving and challenging cave diving in one of the world’s most amazing cave systems.