TMAG Argyle Galleries has been transformed into an amazing exhibition exploring the ancient world of the dinosaurs as part of our 175th anniversary celebrations. 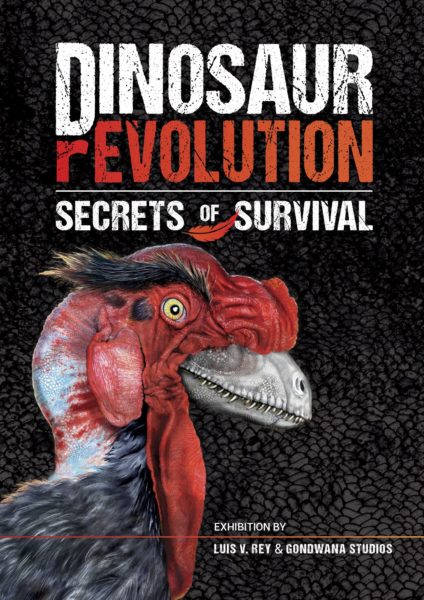 Until recently, knowledge about dinosaurs was based largely on the assumptions made from their internal body structure. Bones and possible muscle and tendon attachments were what scientists used mostly for reconstructing their anatomy. The rest, including the colours, was guesswork, and resulted in  the popular conception of  lizard-like skin in variations of grey.

Dinosaur rEvolution is breaking the mould.

Thanks to new research, we are now able to get a glimpse of the true, bizarre and complex nature of the evolution of the Dinosauria.

The Dinosauria was subdivided in two main groups, according mostly to their pelvic structure: Saurischia and Ornithischia. But they had many things in common, including structures made of a special family of fibrous proteins called keratin that covered their skin in the form of spikes, quills, protofeathers and feathers, that served as insulation, defensive-offensive items or simply ornamentation.

One group (ornithischians) would go extinct and the other (saurischians) would fly into another age!But not before some of their forms collided spectacularly. Porcupine-like runners, massive horned faces and tank-like monsters had to live with and defend themselves against the teeth and claws of the Feathery Menace… a menace that sometimes reached gigantic proportions in the shape of Tyrannosaurus… or in the shape of outlandish, massive ornithomimids with gigantic claws like the newly re-discovered Deinocheirus, reconstructed here for the first time in full.

All of them are well represented and spectacularly mounted in this exhibition. The exhibits are backed with close-to-life-sized colour murals. This exhibition follows the two separate paths of dinosaur evolution that will meet at the end in a massive and dramatic battle.

This is a fee-paying exhibition, due to the high cost in mounting an exhibition on such scale.

But note that Members of the Royal Society of Tasmania are eligible for the concession price of $10.00 (see below):

Click HERE to book your tickets for the Dinosaur rEvolution exhibition

Tickets for school groups on sale in September 2018.

Thank you to all our Partners