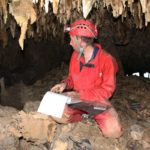 Systematic exploration of the Junee-Florentine karst system in southern Tasmania has been undertaken by recreational cavers and professional speleologists since the 1950s. This exploration has shown the area to contain a complex, interconnected system of caves, including sections of ‘master cave’ where smaller conduits combine to form large passages with high water flows. Documentation of the caves has provided extensive geological, geomorphological, biological and palaeontological (mega-fauna remains and past climatic conditions) information, as well as a lot of fun and adventure. The presentation will outline the methods, past and present, utilised by cavers to discover, explore and document the caves. 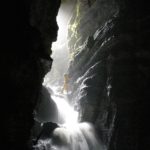 Alan Jackson is a 36-year-old environmental consultant based in Hobart. He completed a Bachelor of Science (Botany) at UTAS in 2001. He joined the Southern Tasmanian Caverneers (Hobart-based caving club) in 2001 and has been an active member ever since, pushing the exploration and documentation of Tasmania’s caves. He has also joined international speleological expeditions to NZ, China and Vietnam. His primary caving focus for over ten years has been the discovery of ‘missing’ sections of ‘master cave’ in Tasmania’s largest karst drainage system at Mt Field.

Admission: $6 General Public, $4 Friends of the Museum and Students
Free for members of The Royal Society of Tasmania
As these events are popular, RSVP is essential by Thursday 20th October 2016:
Email  bookings@qvmag.tas.gov.au  or  telephone  6323 3798