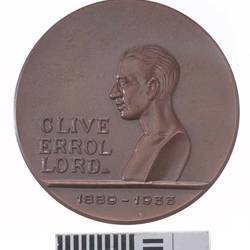 A quick study of the awards would have to include Clive Lord’s contributions to the descriptions of new species found in Tasmania culminating in an invaluable handbook called The Vertebrate Species of Tasmania and thirty papers published in the Society’s peer-reviewed journal. Along with L Rodway’s Botany and R M Johnston’s Geology of Tasmania the handbook is highly regarded. Clive Lord described the Nototherium Mitchelli, an extinct genus of marsupial, among other species including whales and seals.

Clive Lord was closely interested in the problems of early Tasmanian history and the records of the Tasmanian Aborigines. This is why the award oscillates between the disciplines of science and history.

Clive Lord was awarded the Royal Society Medal in 1930 and this newspaper report of its presentation details his achievements.